Top Ten Tuesday is hosted by The Broke and the Bookish . This weeks topic is the best books I’ve read in 2017 – I’ve read 50 books so far this year so I have a few to choose from. Making this list was incredibly difficult because I’ve really loved so many books this year and I don’t know how to choose between them so this list isn’t in that much of an order really. They are all so close.

1: Aristotle and Dante Discover the Secrets of the Universe

I think maybe this isa bit of an obvious pick, it’s a lot of people’s favourite book but I only read it for the first time back in January and I haven’t been able to stop thinking about it. It truly is a masterpiece and I had a real emotional journey reading this. I cried lots at the end, and I cannot wait for the sequel, this book was tragic and awful but also uplifting and beautiful.  The whole story is beautiful really and I don’t think there are many books that could top my love for this one – either this year or ever really. 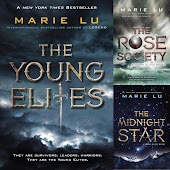 I’m counting this trilogy together because I read them back to back in 2 days and because of that they all kind of merged into one anyway. I had heard lots of mixed reviews about this series but decided to give it a go because the plot sounded really interesting to me. Well I fell in love with it instantly, I seriously don’t know how people don’t love it. The character, the plot, the world – everything captivated me. I really want to reread it but it feels too soon.

3: Lord of Shadows by Cassandra Clare

Lord of Shadows was probably my most anticipated 2017 release. I absolutely ADORED Lady Midnight, I thought it really showed an improvement in Clare’s style and world. Lord of Shadows felt much the same. It’s much more mature then her previous releases, a little less ridiculous, and the characters written better. Emma, Julian, Cristina absolutely shined like in Lady Midnight, but I also loved the addition of Kit and the new trio of Kit/Ty/Livia.  The ending absolutely killed me, I don’t know if I’ll make it to the release of Queen of Air and Darkness.

4: The Hero of Ages by Brandon Sanderson

I read the previous two Mistborn books in 2016, and I was dying to finish it off. The Hero of Ages did not disappoint, it was on par with The Final Empire as my favourite of the trilogy. So many revelations and plot twists I never could of predicted. The ending destroyed me, but it also made me so happy at the same time. It’s weird. I have been meaning to pick up the follow-up Mistborn books for the longest time because I miss this world and Brandon Sandersons style so much.

5: The Song of Achilles by Madeline Miller

Another book I meant to read in 2016 and it just never happened – the retelling of The Iliad fore fronting the relationship of Patroclus and Achilles was one I always knew I was going to enjoy and I definitely did. I love The Classics anyway, so the setting had massive appeal to me. But that aside, the prose was absolutely stunning and the characters felt incredibly raw and real, and their relationship was beautiful and heartbreaking. The ending of this book is so tragic and I kept hoping it’d be different even though I knew what would happen. But it’s an aching and terrible story in the best way and I can see myself rereading it over and over.

6: History is All You Left Me by Adam Silvera

I have only just finished this one, but it was really really good and instantly shoots into  this list. This was my first Silvera book but I’ll definitely be picking up more from him soon. My favourite aspect of this was how it was written stylistically, and the inclusion of the unreliable narrator. I loved how the story slowly shifted, revealing the ugly truths and flaws underneath each character and turned the glorified to the realistic. It’s also just incredibly sad and perceptive, and I had a good ol’ cry at the end. Such a beautiful book about grief and hurting and relationships couldn’t recommend it more highly.

7: The Secret History by Donna Tartt

This one took me by surprise, because I wasn’t that sure of what it was about. But Tasha @faeriedrugs on Youtube recommended it, and I’ve honestly liked every book she has so I took up the recommendation and I’m really glad I did. This is a really unique and quirky book, with characters just as weird, but it worms its way into your heart. It’s characters are not particularly good people, and it’s basically a book of them being and going terrible things but I really enjoyed it, I loved the writing stye and despite the characters flawed ways I haven’t stopped thinking about them or this story.

8: Simon vs The Homo Sapiens Agenda by Becky Albertalli

Another book everyone and their mum read years ago and I never got around to until now. Simon Vs was everything it promised to be. I loved the characters, especially Simon and Blue, and the way the plot was part mystery and part contemporary. I really wish this book had a sequel or something because I want more ! But the whole thing was definitely adorable, fun, quirky and also a little bit serious. It had some good messages and themes and was just hard to put down as well!

9: Every Heart a Doorway by Seanan McGuire

I just finished this one on audiobook and I absolutely loved it. It’s such a cute little story, and even though the mystery was a little obvious, that was fully made up by the characters and worldbuilding. I loved the concept of a school for people who’ve been through doors, and I also really liked the relationships between the kids. This book is also really diverse, with an asexual main character and trans poc major side character. So the diversity and representation aspect of it I really liked too. Planning on starting Down Among the Sticks and Bones very soon – I loved Jack’s character and I’m excited to see more of her.

10: Queens of Geek by Jen Wilde

This one was a tough choice – a bit of a tie-breaker between this and The Gentlemans Guide to Vice and Virtue by Mackenzi Lee and Sula by Toni Morrison. But in the end it went to Queens of Geek – because it’s such a cute and fun book with such great representation and I can’t let that go unnoticed. I loved the representation and it was so nice to see a bisexual girl like me as the main character, but also fat characters, latinx characters and characters on the autism spectrum. The entire story is super cute and fun, and fluffy and I was reaching for it all the time. A perfect cold winter day read.

So there we go! I’ve had SUCH a good reading year in 2017 so far – The majority of books I read were 4 or 5 stars so thats been great, but definitely made it harder to choose my favourites for the year so far. But I’m looking forward to another 6 months of great reads

What are your favourite books so far and what did you think of these 10 if you’ve read them?