I think I’ve already talked about how I wanted to complete at least ten series I had already started this year. I’m currently at 6, so over halfway ! Yesss.

I thought it might be cool to share ALL the series I’ve completed to far,  and highlight some of my favourite series of all time.

I’ve completed 37 series throughout my reading career, and I’m stoked that (hopefully) by the end of the year that will be up to 40. That’s a lot of series! So without further ado here is all the series I’ve completed

One of my favourite series of all time, I think most people have read this or at least heard of it. It’s such a solid duology and I really want to reread it soon because everything about it is great.

This is another series I assume most people have heard of, it’s my favourite (completed) Cassandra Clare series and has a lot of characters I really like within it. Although The Dark Artifices might top it as the best Clare series it’s still a gem.

This series is super underrated but it’s a sci-fi about nanotechnology and it is so wild. I really love it and want to reread it eventually. I remember being totaly mindblown by the technology and the main character was such a kickass girl.

This is another series I talk about a lot. I fell in love with this series this year, the plot and world is amazing but I adored the characters and the concepts of moral ambiguity this book centered around. 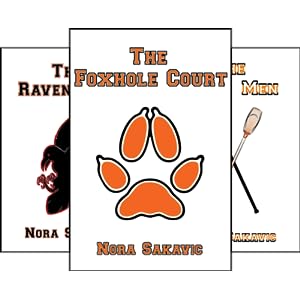 MY ONE GREAT LOVE, The Foxhole Court as it’s more commonly known (because Nora Sakavic had the perfect series title in The Foxhole Court and didn’t go with that smh) But anyway, I absolutely love love love this trilogy so much. Everyone is SICK of me saying that but it’s true. The characters are incredible and I love their stories so much and you all need to read this already don’t let the covers put you off it’s such GOOD QUALITY CONTENT

I WILL HYPE THIS SERIES UNTIL THE DAY I DIE. The Tomorrow Series, or Tomorrow When the War Began, is an Australian series about a group of teenagers who go comping for the weekend – only to return and discover that their town has been invaded by an unknown foreign power. I loved the way that trauma was dealt with in this series, and the realistic depiction of teenagers. Ellie, the main character, is one of my favourite heroines in YA ever. I want to reread this series, but it has soo many books (seven!) I can never motivate myself to. But I still really highly recommend it.

I mean it’s Harry Potter so do I really need to say anything? Favourite series ever and ever blah blah you know the drift obviously this series is my entire life and I’d die for Harry James Potter in an instant.  moving on

Last but definitely not least! I read The Raven Boys on a whim last year and immediately binged the entire series. I fell in love with the characters and atmosphere of the books. Maggie Stiefvater has an amazng writing style, and while I was let down by the end of this series it’s still really great overall. I cannot wait for Maggie to release The Ronan Trilogy.

And thats it! Although I’m actually quite proud of this number! It was heaps more then I thought it would be when I started counting. What series do you guys love and how many have you read?