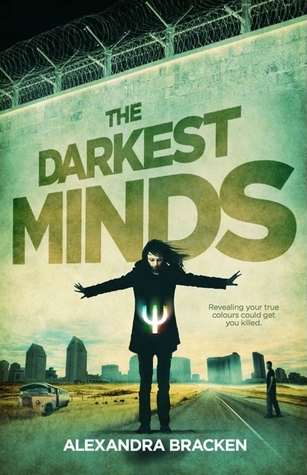 When Ruby woke up on her tenth birthday, something about her had changed. Something frightening enough to make her parents lock her in the garage and call the police. Something that got her sent to Thurmond, a brutal government “rehabilitation camp.” She might have survived the mysterious disease that had killed most of America’s children, but she and the others emerged with something far worse: frightening abilities they could not control.

Now sixteen, Ruby is one of the dangerous ones. When the truth comes out, Ruby barely escapes Thurmond with her life. She is on the run, desperate to find the only safe haven left for kids like her—East River. She joins a group of kids who have escaped their own camp. Liam, their brave leader, is falling hard for Ruby. But no matter how much she aches for him, Ruby can’t risk getting close. Not after what happened to her parents. When they arrive at East River, nothing is as it seems, least of all its mysterious leader. But there are other forces at work, people who will stop at nothing to use Ruby in their fight against the government. Ruby will be faced with a terrible choice, one that may mean giving up her only chance at having a life worth living.

The Darkest Minds is one of those books. For as long as I’ve been in the community people have been talking about it. I see it at bookstores and in libraries all the time. But I never actually knew a thing about it, beside it being a dystopian and some vague knowledge that it involved kids in camps. Only when the movie trailer came out did I realise how much I really didn’t know. I had no idea there was superpowers in this book, but upon finding that out I was hooked. Superpowers are a big yes for me and so I decided I would read this book before the movie came out .. and I did ! (I’m proud usually I don’t end up doing it)

I definitely ended up really enjoying this, much more than I thought I would. I was worried it might be too generic and thus predictable, but I have enjoyed Alexandra Bracken in the past so I had hope. Some elements of this were definitely generic, it had a lot of classic dystopian tropes. But it was also really fun and managed to capture that something about dystopians I always love – the hope in the hopeless situation, and the found family dynamics. I definitely think if I had read this when it actually came out and hadn’t read so many dystopians I would have LOVED it.

The Darkest Minds feels both fresh and familiar. Every time I reach for dystopians there is always some anxiety I will feel like I’ve read this one before.  Early on, The Darkest Minds played straight into those anxieties – the military aesthetic and camp setting early on was intended to be confronting but felt so generic. This isn’t Bracken’s fault, it’s 2018 and this was written in 2012, but  I was worried that this wouldn’t bring anything exciting to the table and was too firmly set in the 2012 dystopian era.

But I needn’t had worried. When The Darkest Minds hits its paces its unputdownable. I couldn’t stop reaching for this fun adventure that seems to blend road trip, dystopian and fantasy genres. The introduction of Liam, Zu and Chubs as the group Ruby finds herself with marked the beginning of good things. This group is tight-knit and exemplifies the found family trope. Each character that appears has their own secrets – Ruby and thus the reader, is privy to none of them. This anxiety created by the mystery behind each characters past is the medium through which Bracken created the majority of conflict between the group. It is also amongst these characters Ruby begins to explore her abilities. The superpowers give the characters strength, but they also introduce a vulnerability and induced anxiety for each character that plays out throughout the book, creating an interesting internal conflict, especially for Ruby. This book only gets better as it goes, from a mediocre start, we follow these characters through a journey with ever rising stakes, until the final third and ultimate end which just hit me in all the places it hurt.

My favourite element of dystopians is the world building and exploration of the deconstruction of “civilised” and “normal” society. The deconstruction of society as the characters know it, and then the endeavour to recreate societies and cultures that serve the characters rapidly evolving needs, oftentimes without help from authority or experts, is always fascinating to me. Half the horror of a dystopian setting is that the world as we know it becomes undone, that people are forced to exist in spaces and situations that are both unsafe and unnatural. It is such an interesting thing to play with!!  As soon as I got a whiff of it in this book I was hooked. It wasn’t taken as far as I would like, but at the same time there was just enough to get me intrigued. And I really enjoyed what I did get. I’m really hoping that carries on throughout the sequels.

But there were a few issues that stuck with me: one scene depicts a sexual assault and I was not entirely happy with how it was handled afterward. The “male saviour” trope definitely came into play here, and giving female characters trauma related to sexual assaults for the purpose of allowing the love interest the “comforting, protective” role always feels icky. This major issue aside, some plot points felt generic and predictable. This is where though, I think it is more an issue of me reading this book six years after the fact than poor writing in itself.

The Darkest Minds thrusts the reader into a world that at first seems predictable. But it is a book that creeps up on you. Slowly you fall in love with these characters, you become intrigued by the setting and the politics of the world, and finally that explosive ending which has me scrambling for book two. Despite it being years since this came out, I felt entertained the entire time reading it, and where some dystopians fall for me, this one stood out. I cannot wait to both read the sequels and see the movie.

5 thoughts on “THE DARKEST MINDS BY ALEXANDRA BRACKEN”