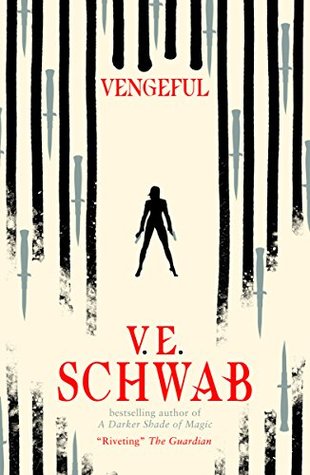 Eli Ever and Victor Vale were only medical students when their mutual discovery that near-death experiences can, under the right conditions, manifest extraordinary abilities.

They were best friends, and rivals, and then enemies. They were dead, then alive, and then—Eli killed Victor, once and for all.

Or so he thought—but Sydney Clarke felt otherwise, and used her own superpower to tip the scales. Now, a trio hides in the shadows, while another takes advantages of post-death life to take over the city of Merit.

If there can be life after death—will there be calm after vengeance, or will chaos rule?

V.E Schwab repeatedly murders me with her series conclusion and surprise surprise, she’s done it again. I literally adore V.E Schwab’s series and especially her conclusions, they tend to be my favourite book in the series. A Conjuring of Light was my favourite Shades of Magic book by FAR and, as anticipated, I enjoyed Vengeful more than Vicious. For me there was so much to love here, new characters, new powers, new plot. And of course the returning characters, the old complications, and at the core of it all, that burning intense rivalry between Victor and Eli.

Victoria Schwab writes the books I wish I could write. Her worlds and characters are so compelling and her stories are intricately woven. Usually it’s her world building that wins me over more than anything but in this series it’s totally her characters.

Let’s discuss the old favourites first. Victor and Eli are the central characters that tie this story together and I LOVED their dynamic here. The continuation of the cat and mouse game that started in book one felt really natural and the conclusion of their story was really bittersweet, but ultimately satisfying. I feel there is definitely room for a third book in this series and I am HERE FOR IT.

Sydney also had so much development. It was really fun to see her toughen and grow up, and her character arc was really interesting. I liked that I never knew what she was going to do until she did it. I was constantly left on my toes and it added so much excitement. I ALSO ADORED VICTOR STEPPING INTO THE FATHER FIGURE ROLE FOR HER. AND THAT SCENE WHEN SHE COMES HOME AND HE’S WAITING K I L L E D  M E. But Sydney is such a non-typical protagonist and she’s super fun to follow, especially in this as she’s getting older and more angsty. I really enjoyed reading her with that little bit of edge she’s developed.

The new characters, particularly Marcella, were also really interesting. I loved the juxtaposition between Marcella and Victor. Schwab works a lot with juxtapositions and representing characters as foils of each other in this series and it’s really interesting. Marcella added this dynamic third element that kept me intrigued. I also loved her just as this real bad bitch woman, and it’s so refreshing to see a woman who is both powerful in their own right, and villainous.

In Vengeful, Schwab takes her characters and amps them up to a hundred, pushing them right to their emotional and physical limits. I love that she does that in her conclusions. I feel there is always so much follow through and development that makes me fall in love with her characters all over again.

I really admired how Schwab was able to make this feel like such a progression of the original book. It felt like this sequel has always been there and that continuity was amazing. The world building, especially in involving more EO and law enforcement was really interesting to me. For some reason, I always enjoy plots where police get involved with superhero or super-powered beings so I was pretty much set to love this trope here.

The disjointed time and careful plot construction was also a highlight. I know V.E Schwab did full rewrites and I can see how they’ve benefitted her. The non-linear time added so much to this story for me, especially in creating mystery and intrigue.

The only thing I feel ambiguous about is the ending, but I think that is just because I want a sequel so bad. Objectively, I can see it works. But I WANT A SEQUEL SO THAT ENDING CANNOT STAND. I’d love to read a hundred more books in this world.

I adore this series and Vengeful has absolutely solidified that for me in my mind. It’s a thrilling, original series with complex main characters and tight, meticulous plot lines. V.E Schwab writes such admirable and clever books and this one makes me wish I had her talent, so fucking much. It was truly perfect.