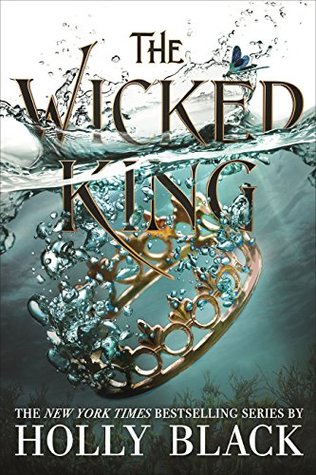 After the jaw-dropping revelation that Oak is the heir to Faerie, Jude must keep her younger brother safe. To do so, she has bound the wicked king, Cardan, to her, and made herself the power behind the throne. Navigating the constantly shifting political alliances of Faerie would be difficult enough if Cardan were easy to control. But he does everything in his power to humiliate and undermine her even as his fascination with her remains undiminished.

When it becomes all too clear that someone close to Jude means to betray her, threatening her own life and the lives of everyone she loves, Jude must uncover the traitor and fight her own complicated feelings for Cardan to maintain control as a mortal in a Faerie world.

I am posting a few spoilery discussions points at the end of this review and will mark when the spoilers begin.

The Cruel Prince was one of those books I read and liked, and I knew I would read the sequel too eventually – but didn’t have super strong feelings for. So imagine my surprise when the release date got closer, my excitement rose, I reread The Cruel Prince in anticipation and then FINALLY, got to read this. I found myself enjoying this so much more than I expected to. It

The Wicked King is set just a few months after The Cruel Prince. Once again, we follow Jude as she attempts to navigate ruling the kingdom from behind the scenes. With only six month of her bargain with Cardan left, and Faerie coming under new threat, Jude has to find a way to secure her place in Faerie and keep Oak off the throne before she is betrayed by the forces around her.

For me, the strongest element of these books is the political intrigue. I love the politics in these books – Black manages to hold onto suspense and anticipation the entire time throughout. The court politics are messy and dramatic, but every single time I’m never quite sure who to trust and I love it – that is politics done to its finest.

I really love how Holly Black plays with perspective in these books, and uses off-page action to conceal the motivations and plans of various characters. She is really good at building mystery – giving you just enough to get intrigued but not enough to guess everything that going to happen. But I also am so pleased her reveals make sense – that feeling when everything suddenly clicks into place and you wonder how you missed it all along is the best.

Overall, the pacing in The Wicked King was also much better than The Cruel Prince. Part two was so exciting, and rushed me right along to that huge ending.

Lets talk characters! I think Holly Black writes such intriguing characters throughout the whole of this series – not just the mains, but the side characters too. But Jude, being the main character, is my favourite. I LOVE HER. She is such an excellent female character, who has complex motivations and is definitely more morally grey than anything. I like that, if this was from anyone else’s perspective, she would seem like a villain. I think that is interesting.

My surprise favourite of this book was Nicasia? She had much more development and depth added to her character and I actually feel .. bad for her? Wow.

Of course, Cardan was still fun in this too! He is definitely getting much more interesting as this series goes on, especially in part two his motivations intrigued me a lot and I am excited to see where Holly Black goes with his character in Queen of Nothing. Although, I will say some parts of his story, especially about his backstory, were whack and just kinda weird.

Overall the Cruel Prince is a strong second book – definitely stronger than the first. It really develops on what was established in book one, but brings everything into a much larger scale, and raises the stakes so much. Jude is a great main character to follow, and I love how this series plays around with morality and virtue – I think the last book is going to be the best one of them all and I cannot wait for it.

Okay that is pretty much everything I wanted to discuss, thanks for reading!