Hi all !   Welcome to November. This TBR is a little bit late but, better late then never!

I’m really hoping to make this a huge reading and writing month. I really want to do a bit of work on my WIP since it’s nanowrimo, and I’d also like to get back into reading because I’ve had a few busy months in a row where I haven’t been able to read much. I’m doing a very chill structured TBR because I just want to mood read to get back into the groove of reading.

If you don’t know – Structured TBR is something I do on my blog when choosing my TBR. The idea was to create a TBR with more structure that would encourage me to pick up books outside my comfort zone. So instead of reading lots of similar things, I’d read more of a mix.

I essentially choose two books per category, and the challenge is to try and read at least one of them per category. Choosing two books gives me options on what to read since I’m such a mood reader whilst also keeping some guidelines.

I’ve decided to shake up the Structured TBR this month by choosing some brand new categories for the TBR. I’ve been using the same ones since forever and I thought including some new ones would keep it interesting

Novembers TBR categories are:
owned book, random pick and next-in-series. I really want to participate in non-fiction November this month so I’m not adding too many categories.

The random pick is something I started on twitter. I made a tweet asking people to like if they wanted to choose a book off of my TBR for me to read. This month, my random generator chose Nat to choose a book for me.

Nat chose We Set the Dark on Fire by Tehlor Kay Mejia. This is an f/f romance and someone told me its got Girls of Paper and Fire vibes so I’m here for that.

I’m also going to be reading Our Dark Duet by V.E Schwab which was last months pick that I didn’t get to.

The Queen of the Tearling by Erika Johansen  ➵   I put this book in my end of year tag as a book I started and needed to finish. I’ve started and really need to finish. I started the audiobook for this a while back and HATED the narrator. I’m hoping to pick up the physical version which I own.

Imaginary Friend by Stephen Chbosky  ➵   I just got this book in a package from Hachette Australia (thankyou!) and I can’t wait to dive in. I had this on my TBR last month and didn’t get to it – it’s pretty long which is intimidating. 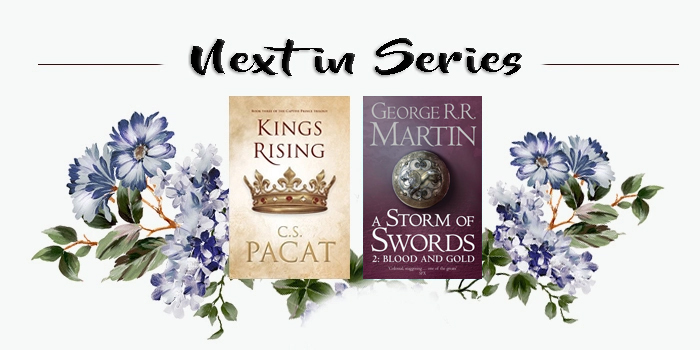 Kings Rising by C.S Pacat  ➵   This is one series I really want to finish before the end of the year. It’s also an owned book so it doubles. I had this on last months TBR and didn’t get to it, but I really need to!

A Storm of Swords (part two) by George R.R Martin  ➵   I wanted to catch up on this series in 2019. That obviously didn’t happen but I did read ASOS part one, so I think I should at least try to read part two before the end of the year.

It’s non-fiction November and I really want to participate this year. Non-Fiction November is hosted by Olive from abookolive. As the name suggests, this readathon is about reading non-fiction. The main challenge is just to read more non-fiction than you typically would in a month. There are also four challenges. The announcement video is linked above if you want more info.

I’m going to try and complete one book per word challenge. If I total four non-fiction books that would be way more than I’d usually read in a month. The four challenges are design, sport, true and voice – and these can be interpreted however you want!

This is a book I have actually been saving for non-fiction November because it’s long and intimidating but I really want to read it. This is a biography about Leonardo Da Vinci who is someone who has always fascinated me. I’ve also been trying to get more into art history so starting with a legend like Da Vinci seems the way to go. I used this for design because Da Vinci was obviously a painter and creating art is designing but he was also a designer in the more literal sense.

Life as I Know It by Michelle Payne  ➵ sport

This is another book I really wanted to read before the end of the year. This is about Australia’s history in the Timor Leste. I’m pretty sure this includes documents about oil theft and government support for illegitimate regimes. Australia’s involvement in Timor Leste has been exposed recently by whistleblowers which is a story I’ve been following so I thought this would tie in well to that. I chose this for true because it’s focussed around bringing light to a true story not many people know about.

No Friend by the Mountains by Behrouz Boochani  ➵ voice

This is a book I’ve heard SO much about in 2018 and the hype rolled right through into 2019. This is by Behrouz Boochani, a Kurdish journalist imprisoned on Manus Island which is Australia’s detention centres for refugees seeking asylum. This was being praised for it’s confronting and important content and look into the conditions of asylum seekers. This I chose for voice because it’s an important voice, but also because of the way this was voices. It was translated from Boochani’s Farsi texts into English by an Australian journalist who then helped write and publish this book.

The Queen of Nothing by Holly Black  ➵

This is coming out on the 16th and I really want to read this ASAP as possible. I just know everyone is going to be spoiling it on twitter so I wanna get ahead of that and read it as close to release as I can.

This book just came out and it’s by Camryn Garrett who is a wonderful person on twitter and one of my mutuals. She wrote this as a teenager and it’s about an HIV positive Black teen and I have just heard it is amazing and I want to read it when my library copy becomes available.

I, Iago by Nicole Galland  ➵

This is one that I just got from the library but it’s been on my TBR for a while. This is a retelling of Othello but it focusses on the life of Iago and tries to fill in some of the characters life before the events of Othello. I’m interested in seeing what Galland does with this character.