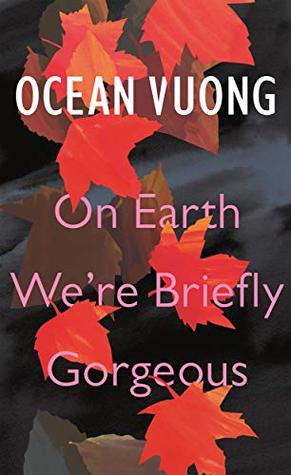 On Earth We’re Briefly Gorgeous is a letter from a son to a mother who cannot read. Written when the speaker, Little Dog, is in his late twenties, the letter unearths a family’s history that began before he was born – a history whose epicentre is rooted in Vietnam – and serves as a doorway into parts of his life his mother has never known, all of it leading to an unforgettable revelation. At once a witness to the fraught yet undeniable love between a single mother and her son, it is also a brutally honest exploration of race, class, and masculinity. Asking questions central to the American moment, immersed as it is in addiction, violence, and trauma, but undergirded by compassion and tenderness, On Earth We’re Briefly Gorgeous is as much about the power of telling one’s own story as it is about the obliterating silence of not being heard.

❝   I’m thinking of beauty again, how some things are hunted because we deem them beautiful. If, relative to the history of our planet, individual life is so short, then to be gorgeous, even from the day you’re born to the day you die is to be gorgeous, only briefly  ❞

I read the first chapter of On Earth We’re Briefly Gorgeous and immediately had to put the book down. Not because it was bad, but because it was so good. For a moment, I had to just close this book and let myself sit with what I had just heard. I knew then it was going to be a book I love, that sticks with me once I’ve finished. And I was right.

On Earth We’re Briefly Gorgeous is Ocean Vuong’s first novel. In it, Vuong assumes the voice of ‘Little Dog’, writing to speak directly to his illiterate mother. He asks her about her life, his life, their relationship, and what she thinks of the various issues Little Dog ruminates on. Of course, always with an undercurrent of Little Dog revealing his most inner, secret thoughts because these are letters she will never be able to read.

People use words vague words ‘thoughtful, tender, raw, evocative and moving’ for books all the time. Sometimes I feel they’re just tacked on for the sake of it. But in this case, I feel like this book deserves every label that people have thrown at it. It is deeply touching, raw in its prose and you get the sense it’s impacting the writer as much as the reader.

What struck me about the prose is not only how lyrical it is (unsurprising, given Vuong is a poet) but also how each word feels like it was ripped from Vuong’s chest. Every word in this book reads like was the first time Vuong was saying it. It feels like reading a diary, in the best way possible. It’s intentional, and it works perfectly. It made this uncomfortable to read in parts, because it felt like such a private and intimate look into someone’s psyche, and seeing a vulnerability that should not necessarily be for public consumption. But I think that is also what made this feel so authentic and why the emotions resonated with me so much, to the point where I think over and over certain parts.

Vuong’s thoughts are both personal and universal. He talks about his individual experiences growing up as a gay, Vietnamese immigrant. He draws on his mother and grandmother’s perspectives living through the Vietnam war. He details the horrific and sudden death of those around him. Though these experiences are personal, the well of grief and sorrow Vuong is drawing from, and the way he poses questions about identity, life, love, and how we carry on in the face of trauma and death felt almost as if he was speaking to me. Ultimately, he draws from experiences and emotions everyone can relate to, and tap into, and this blend of the personal and the universal was powerful.
I think that is why this book is so successful and has found so many readers who relate to and resonated with Vuong’s words, despite this being more of a poetic memoir than anything.

A theme I loved was the idea of language as a conduit for understanding. Vuong shows that communication and language is so important in knowing and relating to others. Vuong uses language to bridge the chasm between people. His mother cannot fully know him through his words because she does not understand them, and yet knowing and understanding is so much deeper and more complex than this in Vuong’s vision of the world. Language is a powerful signifier, but so is culture, identity, love, friendship, romance and family. Through Vuong’s heartbreaking confessional, he pleads to be seen and known, and we come in turn to understand that perceiving and knowing and communicating with someone is so much more complex then you could ever manage through letters. Language is powerful for Vuong, and I identified with that theme a lot.

I know this is a book I could say a lot more about, but it’s a book I’ve struggled to adequately explain my feelings on through two weeks of attempting to write this review because the impact it had on me was so profoundly emotional rather than intellectual. Vuong’s words resonated with me deeply, and I have not stopped thinking about this book and everything it talked about since I’ve finished it. I don’t even think this is a book you need to relate with to enjoy because it’s prose is so beautifully written and poignant just listening to it is enough to enjoy it. It’s a book you just need to read.

❝   All freedom is relative—you know too well—and sometimes it’s no freedom at all, but simply the cage widening far away from you, the bars abstracted with distance but still there, as when they “free” wild animals into nature preserves only to contain them yet again by larger borders. But I took it anyway, that widening  ❞

I also have to mention that I listened to an audiobook of this, narrated by Vuong, and I thoroughly enjoyed the experience. While I would like to go back and reread the physical version, but hearing Vuong narrate this added another layer of vulnerability and emotion I enjoyed.

On Earth We’re Briefly Gorgeous has been well received by critics and for good reason. It’s beautifully written, rich in themes, and powerfully wrought. I think this is a book more people should read, and I look forward to reading Vuong’s poetry sometime in the future.